The SOBICAIN – International Catholic Biblical Society – was founded by Father James Alberione in 1924. Pope John XXIII approved the Statues of SOBICAIN on 14 October 1960, elevating it to the status of a Primary Union as stated in the Pontifical Brief of the same date.

The clear mission of SOBICAIN is to encourage the Pauline biblical apostolate in the world: to bring the Word of God to all peoples and nations, to promote and support new editions and translations of the Bible. “Go into all the world and preach the Good News to all creation” (Mk 16,15). Through the Centro Bíblico San Pablo CBSP, we seek to carry out the biblical animation of the entire pastoral ministry, developed in its essential aspects of formation, spirituality, prayer meetings and dialogue with the Word of God.

In 1972 the Latin American Bible (also known as the “Biblia Latinoamericana”) was born, a project of the Pastoral Bible developed by Father Bernardo Hurault. There was a need to have a text of easy comprehension and simple language accessible for everyone. This was in keeping with the SOBICAIN Statute: that the Word of God should reach the humblest of the humble, from the most diverse cultures.

In addition to publishing in the most widely spoken languages (English, Spanish, French, Italian, Portuguese, Chinese), the editorial service of the Word of God has led SOBICAIN to publish the Pastoral Bible in the languages and cultures of various Peoples: Tagalog, Cebuano, Ilonggo (Philippines), Quichua (Ecuador), Quechua (Peru), Guarani (Paraguay).

As a gift for the 60th anniversary of SOBICAIN last October of 2021, The Bible Scruttate le Scritture, an Italian edition for study and meditation on the Word of God, was published. Presently, SOBICAIN is exporting worldwide, especially to the Spanish-speaking community. 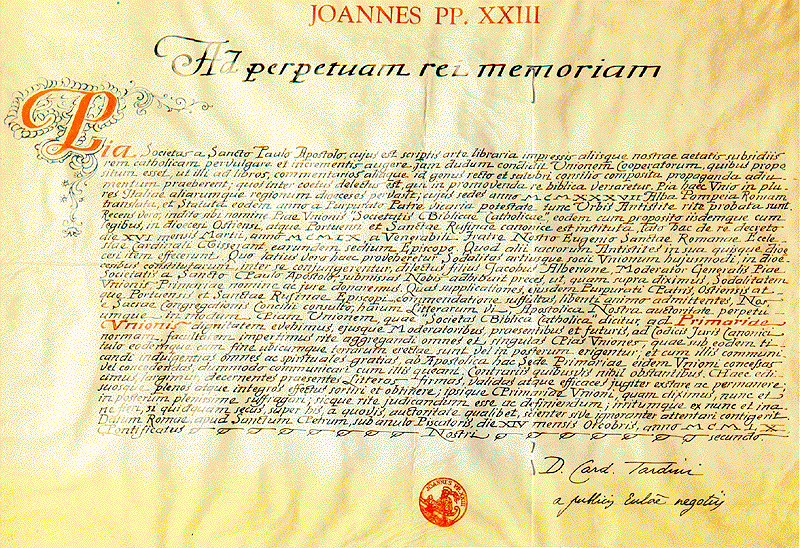 The Pious Society of St. Paul aims to spread and increase Catholic life and doctrine utilizing the press and other modern means. To promote the printing and advertising of books, magazines, and similar editions, the Pious Society founded the Union of Cooperators from among whom a group was chosen to dedicate itself in a particular way to the promotion of biblical initiatives.

The Pious Union of Cooperators spread to various dioceses in Italy and other countries, and in 1937 its headquarters were transferred from Alba to Rome, wherein the same year the Statutes were officially approved by the then Cardinal Vicar of the city.

Then, recently, the Pious Union, after receiving the name of “Catholic Biblical Society” with the same purpose and governed by the same laws, was canonically erected in the Diocese of Ostia, Porto, and Santa Rufina with the decree of 16th March 1960, issued by Our Ven. Brother Eugenio Tisserant, Cardinal of the Holy Roman Church and bishop of the same dioceses. Other Bishops did the same thing in their respective dioceses.

We publicly notify and grant these things, decreeing that the present Brief shall be and remain perennially stable, valid, and efficacious, shall attain and preserve its full and complete effects, and shall serve, now and in the future, of full utility to the aforesaid Primary Union. We finally declared that it is to be so judged and defined as to render invalid and of no value from this moment onwards anything which may be knowingly or unknowingly attempted to be established in this respect by anyone on any authority whatsoever.

The organizational chart of Sobicain

The Bible Centre: history and documents

Constituted on 4 April 2013 with a Statute “ad experimentum”, on the occasion of the IX General Chapter, the service of the Centro Biblico San Paolo was confirmed by the X General Chapter (operative line 1.1.3).

In response to the objective outlined by the Statute (“To develop and implement a biblical pastoral project, in the broad sense of the term, which can serve as a point of reference for the biblical apostolate of the Congregation”), the International Coordinator of the Biblical Centre, after having listened to the District Coordinators at the International Assembly held in Cinisello Balsamo (Mi) from 24 to 28 May 2017 and after having discussed with his Council, has proposed for the approval of the CTIA and, subsequently, of the General Government of the SSP, the Congregational Biblical Pastoral Project, which describes its objective, operational guidelines and recommendations.